Bubble and Squeak is the perfect leftover meal – just throw in whatever veg you have in the fridge and mix it with mashed potatoes or cooked potatoes. This recipe has instructions for how to cook bubble and squeak in the pan OR how to bake them in the oven.

Bubble and Squeak is the ideal leftover meal. Often leftovers are simply reheated, but bubble and squeak takes it to another level and turn leftovers into a whole new dish!

The name bubble and squeak is said to come from the squeaking and bubbling sound it makes when it’s being fried in the pan, and if you make it, listen if you can hear any peculiar sounds!

Even if it’s usually made with leftover vegetables, you can use fresh vegetables such as cabbage (like in this recipe) mix it with either mashed potatoes or cooked floury potatoes.

If using fresh cabbage, here at Nutritionist meets Chef we recommend that you boil the cabbage instead of using raw cabbage. Boiling the cabbage will make it softer and gives it a mellow flavour. It also gives the bubble and squeak a better shape, especially when you make small individual cakes.

You can also use savoy cabbage or Brussels sprouts.

Bake or Fry Bubble and Squeak?

Traditionally, Bubble and Squeak is fried in a pan. However, if you want to bake it in the oven, that works too.

Baking it in the oven can lower the fat content, especially if you don’t brush it with any oil or butter before baking it. If not brushing them with oil, use a silicon baking mat which is non-stick, or be very gentle when flipping them over.

Baking Bubble and Squeak will make it hold its shape better. It will have a crisp outside, yet be soft in the middle. However, you won’t get the same browned top and bottom as when you pan fry it. However, baking it in the oven takes longer.

Pan frying bubble and squeak will give it a crispy top and bottom with soft edges, but it can be more fragile.

You can also mix both methods, by first frying the bubble and squeak until browned and then baking it in the oven! Then you get the best of both worlds.

First picture; Without any brushing of oil or butter before baking. Second picture; Pan fried and baked.

The picture on the bottom; Only pan fired!

Depending on what vegetables you use, it will have different nutritional value but if using potato and cabbage this meal will provide you with

Looking for other potato recipes?

If you make this recipe, please comment and rate it! And don’t forget to take a picture and @nutritionistmeetschef on Instagram! We love to see your pictures! 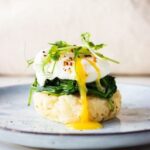